About the Founding Sewell Family

Frankly, the Sewell family would prefer to remain out of the spotlight and let the company’s history be told through the quality work of our employees and the loyalty of the customers we serve.

Howard Sewell, Sr. established Sewell Brothers Motor Express in 1921 (which later became Sewell Motor Express). Consider for even a moment the major changes the freight transportation industry has experienced since 1921, and it’s obvious that something has been unique about the leadership: very few trucking companies exist that are approaching a 100-year celebration.

What’s unique is a family trait that prioritizes faith, family, community, and company, and serves each of these “constituents” as an interrelated whole. It’s also unusual for leadership reins to pass three generations with such continuity and consistency in the commitment to these priorities.

When Howard, Sr. passed away in 1962, his son, Howard, Jr. assumed the role of President. He not only carried on his father’s values, but also successfully instilled them in his son, Jay. 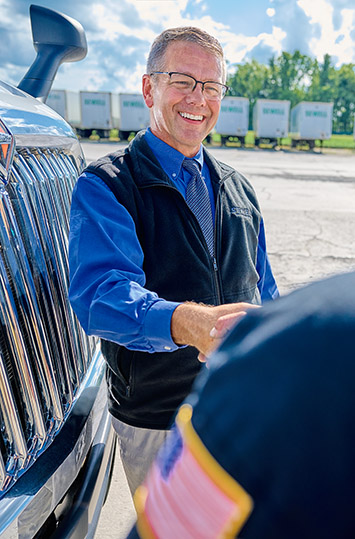 Jay worked his way through high school and college as any new employee would.  Learning from the ground up, he did everything from cleaning and maintenance, to working on the dock, loading and unloading all of the trucks coming in and out each day.

Upon graduation from The Ohio State University, Jay went to work for Roadway Package System, where he held multiple roles in management and sales.  While working for RPS for nearly ten years, he gained valuable experience and insight before returning to the family business in 1996.

Back at Sewell Motor Express, Jay immersed himself in all aspects of the family business.  With the strong belief that understanding the challenges each department faces is vital for a team to succeed, he worked in nearly every department before he assumed the role of President in 1998.

Jay’s commitment to the company is only part of his story. He is extremely involved in the Wilmington community and is one of the area leaders who make Wilmington such a wonderful place to live and work. Among the area organizations that Jay contributes his time and leadership ability to, are the Wilmington Rotary Club where he has served as President and the Clinton County Walk America March of Dimes. He has also been a Five Star Ambassador for Clinton Memorial Hospital Foundation. However, Jay would rather talk about his church, where he is an usher or relive stories of being a part of The Ohio State Marching Band and the current Alumni Band.

Perhaps the most unique organization Jay devotes time to is the Wilmington Banana Split Festival as the past Chairman, and serves as the current Chairman of the Big Banana Baseball Tournament. If you ever wondered where the banana split was first served, look to Wilmington. The city stakes claim on being the birthplace of the banana split, and each June, a festival celebrating this great American hot weather treat fills a weekend with rides and games, crafts, a car show, and of course, a banana split eating contest. It’s a fun Wilmington tradition that has also benefited from Jay’s involvement.

Jay and his wife, Dana, and their three grown children, Madelyn, Jake and Austin, are all active in community activities.

It’s important to understand that this background on Jay with his family and their devotion to the Wilmington community to better understand Sewell Motor Express as a company.

The family values have no doubt arisen from within, yet they are also inspired and encouraged by a wonderful community. And, they are values that the Sewell Motor Express company embraces as a business. These are values that employees also possess and inspire in everyone they work with.

Considering Albert Einstein’s opinion that the ideal of service supersedes that of success, it’s also evident within the operation and evolution of Sewell Motor Express. Over the years that the commitment to serve has fostered success for nearly a century.

When you drive for Sewell Motor Express, you’re more than just a driver, you are a part of our family. We know that our drivers are the reason for our success and we will work to give you the support and respect you deserve in your career. We stand behind our drivers, mile after mile.